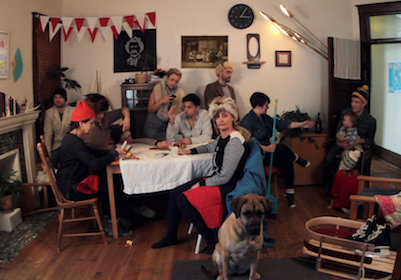 Jacquelyn Hébert is an interdisciplinary artist whose work stems from an interest in historical, cultural and imagined narratives. In addition to a BFA with a Film, Video + Integrated Media Major from Emily Carr University, she holds a BA with an Anthropology Major from the University of Manitoba. Her recent artistic focus deals with the complexity of Canadian identity. In 2011, she was awarded a J.A. Bombardier Canada Graduate Scholarship from the Social Science and Humanities’ Research Council (SSHRC) of Canada in support of her research-creation project Francophone-hybride. Jacquelyn’s main artistic focus is installation and experimental documentary. She is interested in examining the spaces between our cultural expectations and the reality of lived experience. In her work, she also explores how digital media can intersect with the handmade, found or obsolete.

Jacquelyn has presented her work both nationally and internationally, most recently at La maison des artistes visuels in Winnipeg, the FOFA Gallery in Montreal, the 8fest in Toronto and L’Acropolis de Nice in Nice, France. In 2014, she completed a Master of Fine Arts at Concordia University in Montreal and she now lives and works in Toronto. Jacquelyn has worked in arts administration and arts education since 2005, holding positions with the Emily Carr University Writing Centre, the Manitoba Arts Council, The Winnipeg Film Group, and Concordia’s Department of Fine Arts to name a few. In addition to her work at Le Labo, she is also the Community Manager for VUCAVU.com , an online distribution platform for independent Canadian film and video.